These are some of the findings derived from the2019 U.S. Energy and Employment Report (USEER), produced by the Energy Futures Initiative (EFI) in partnership with the National Association of State Energy Officials (NASEO), using data collected and analyzed by BW Research Partnership. The report is available at www.usenergyjobs.org. 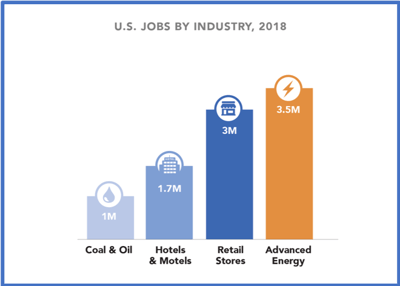 At 3.5 million jobs, advanced energy employs more U.S. workers than retail stores (3 million), twice as many as hotels and motels (1.7 million), and more than three times as many as the coal and oil industries combined (1 million), according to the Bureau of Labor Statistics (retail and hotel/motel) and USEER (coal and oil).

“Advanced energy is a significant growth industry,” said Nat Kreamer, CEO of AEE. “From energy efficiency to electric vehicles, the technologies and services that constitute advanced energy are creating jobs and helping the U.S. economy expand. At AEE, we are working to promote state and federal policies that remove barriers and expand markets. As long as advanced energy products are allowed to compete on performance and price, we can keep this economic driver going.”

About Advanced Energy Economy
Advanced Energy Economy (AEE) is a national association of businesses that are making the energy we use secure, clean, and affordable. Advanced energy encompasses a broad range of products and services that constitute the best available technologies for meeting energy needs today and tomorrow. AEE’s mission is to transform public policy to enable rapid growth of advanced energy businesses. Engaged at the federal level and in more than a dozen states around the country, AEE represents more than 100 companies in the $200 billion U.S. advanced energy industry, which employs 3.5 million U.S. workers. Learn more at www.aee.net and follow the latest industry news @AEEnet.