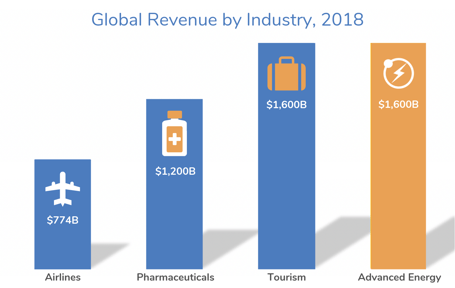 WASHINGTON, D.C., April 25, 2019 – Today, the business group Advanced Energy Economy (AEE) announced that total revenue for advanced energy worldwide was a record $1.6 trillion in 2018, making the industry equal to global tourism, bigger than pharmaceuticals, and twice the size of airlines worldwide. The U.S. advanced energy market hit $238 billion after growing 11% in 2018 – nearly four times as fast as U.S. GDP. Advanced energy is now nearly equal in revenue to aerospace manufacturing, and twice the revenue of the biotech industry.

These findings, along with details by market segment, are found in the Advanced Energy Now 2019 Market Report produced by Navigant Research for AEE. The 2019 edition includes global and U.S. revenue for the industry annually from 2011 to 2018, showing powerful growth over the seven-year period, including compound annual growth of 8% for U.S. advanced energy overall.

“Growth of the advanced energy market in the United States over the past seven years has been truly remarkable,” said Nat Kreamer, CEO of AEE. “Advanced energy technologies and services have become mainstream parts of the economy. Making the buildings we live and work in smarter and more efficient. Generating electricity from the sun and wind. Storing energy for when we need it most. And now we’re seeing electric vehicles hit an inflection point, with sales starting up the hockey stick thanks to lower prices, longer ranges, and more charging options. It’s no wonder that the advanced energy industry is driving economic growth across the country and employing 3.5 million Americans.”

Of the $25 billion overall increase in U.S. advanced energy revenue over 2017, the bulk came in three segments: Advanced Transportation ($7.9 billion), led by explosive growth in revenue from plug-in electric vehicles (EVs); Building Efficiency ($7.8 billion), a steady source of growth since 2011; and Advanced Fuel Production ($5.4 billion), marked by a rebound in ethanol and biodiesel revenue.

“AEE’s mission is not just to report on industry growth, but to keep it going,” said Kreamer. “AEE and its business members are committed to working with policymakers in states and in the wholesale electricity markets governed by FERC to ensure that all our technologies get the chance to compete on price and performance, because when advanced energy technologies compete, they win.”

About Advanced Energy Economy
Advanced Energy Economy (AEE) is a national association of businesses that are making the energy we use secure, clean, and affordable. Advanced energy encompasses a broad range of products and services that constitute the best available technologies for meeting energy needs today and tomorrow. AEE’s mission is to transform public policy to enable rapid growth of advanced energy businesses. Engaged at the federal level and in more than a dozen states around the country, AEE represents more than 100 companies in the $238 billion U.S. advanced energy industry, which employs 3.5 million U.S. workers. Learn more at www.aee.net and follow the latest industry news @AEEnet.